Hello again. Here’s what I’ve been up to!

On Friday 30th June I went to the Devon Sports Awards at Sandy Park in Exeter. I was so glad my new shoes came in time! It was really posh, with posh food. 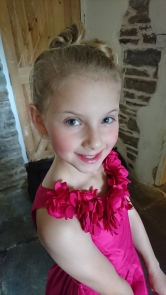 I was the only child there. I met James Cracknell, Olympic athlete (I want to get to the Olympics like him). We talked about gymnastics and Croyde and I told him about my head injury. He had a very very bad head accident too, and recovered. We had a lot of similar things to say. I hope to be the best athlete I can too.

I also met Michael Caines the chef, who was really friendly.

Lots of people spoke to me and I had lots of professional photos taken. I received an award for Performance in Community Sport. It was very special to receive it. Thank you.

On Sat I was in the gym at 9am! After a late night! Kelly was away, so Ryan was our coach. It was fun. In the afternoon I relaxed and watched the gym movie, ‘Full out’ about Ariana Berlin. It is based on true story. There were some similar things to my situation. She had to battle to get back to gymnastics after an accident. I just know I can do it too.

Sunday
I wanted to go for a run with Bella and Mum!

Mon
Week 7
Kelly had done a new programme for me. It was harder and took 3hrs. After gym at home we made our scarecrow. Everyone in our village makes one for July. Bella and me said it had to be a gymnast. Everything is about gymnastics!

Tues
I am achy today but Kelly said I would be. I went swimming with school. I was excited and happy to go to gym 5-7. I’m starting to feel a bit more normal now.
Really buzzing! Maybe I could try an upstart on bars now?! Please. Starting to really get the urge to want to do things! I know I am only half way through my recovery and I’m trying to be patient but also getting really excited about the next steps!
Some friends told me that they heard my name on local radio The Voicefm today!

Weds
So excited…I did upstarts! Also did 10 chin ups and got a raffle ticket to go into our new skills (not a new skill for me but a target!) pot for the chance to win a leotard. I did a really hard programme and some extra stretching and stayed nearly 4 hrs! I was supposed to finish at 7pm but stayed til 7.50!

Sat 9am – 1pm gym. I did conditioning with all the rest of the Elite Squad for the first time. I was given the trophy for conditioning of the week! Really happy! It was fun at our Holywell Rocks music festival in the afternoon and I did some live singing with two of my friends.

Mon
WEEK 8
I went to the Big Sheep with school. Gym 4-7pm. I told mum to pick me up at 7pm but when she got there I actually wanted to stay til 8 to do conditioning with others, but couldn’t today. Got a raffle ticket! Held a chin up for 1 minute! My arms were really shaking, it was tough. But I did it!

Tues. School swimming with clothes on in the pool. Gym 5-7pm

Weds Gym 4-8pm – felt a bit dead but good! I had a bit of vibration on my head, but it was because I was working so hard and my head is still getting used to it. Getting so close to 2 months now and ⅔ through my recovery!

Thurs day off. Fun with friends!

Friday 1pm – 5pm in the gym. (My poor sister Bella is injured at the moment so she couldn’t come training) 4-5pm ballet lesson. It’s been a while since my last ballet lessons with Marion and Elmhurst! It was quite nice.

Sat 9-1pm IT WAS A GOOD DAY IN THE GYM TODAY. I did some new leaps! It really made me happy and put a smile on my face. Watch them!

Very very happy to see this little lady slowly recovering and coming back, well done Felicity. P.S even the most horrible injuries can't ruin beautiful lines, amplitude, and extension 💪❤️🇬🇧 #Repost from @falconsgymnastics. This little one may not be able to go upside down for another month but already 2 months down in her recovery time and able to work on some new leaps/jumps. Well done Fliss 😀👏🏻🌟 #leaps #flexibility #dance #beam #Johnson #splitjump #fullturn #watchhercomebackstronger #passion #determination #roadtorecovery #diamonds

Hopefully soon I will not just be doing little things but big things! IT’S 2 MONTHS TODAY SINCE MY ACCIDENT! I only have one month left of my recovery time – fingers crossed! Please cross them too. Really hope my consultant says I can get back to doing real skills again after I see him later in August. I’LL KEEP HOPING AND BELIEVING. I REALLY REALLY WANT TO GET BACK TO PROPER GYM. I’m getting there. ☺️

6 thoughts on “Devon Award and I’ve crossed 2 months off! Yay!”

This site uses Akismet to reduce spam. Learn how your comment data is processed.